Public Notice Notice of Intent to Issue Certificates of Obligation Read On...

The City of Odessa was incorporated on April 18, 1927. The first police judge was appointed on July 20, 1936, and received $1 for each case that was prosecuted. The first traffic signals were installed at the intersections of Grant and Pearl, Grant and 5th Street, and Grant and 8th Street on December 13, 1939.

Additionally, on this date, the City traded $340 worth of Elm trees to Ector County for a motorcycle.

From 1934 to 1944, the City of Odessa had two Police Chiefs: Hugh Ratliff and Luther Thomas Reese. At that time they were called City Marshals and along with a Deputy, they were responsible for law enforcement within the city.

There was no two-way radio communications at that time. The only means of communication was a red light which sat on top of the County Court House. When this light was on, officers would go to a call box and call into the station to obtain the call for service.

City Hall and Police Department in the mid to late 1940s, located at 200 N Lincoln, which is now the current site of the Central Fire Station.

Carl Taylor was Odessa's 3rd Chief of Police. He was also the last elected Police Chief for the City and served from 1944 to 1946. Chief Taylor fell out of grace with the City Council and was replaced by H.S. Cowsar. According to Charles Wayne Kessler, who joined the Odessa Police Department (OPD) on November 1, 1945, there were 6 officers working 12 hour shifts.

The City limits extended north to 8th Street, west to West County Road, east to East County Road (Dixie Boulevard) and south to just a little past Clements Street. OPD had three jail cells and officers did not carry handcuffs. Under Chief Taylor, officers were given a choice of working 2 man units for 10 hours a day or 1 man units for 8 hours a day.

H.S. Cowsar was Odessa's fourth Chief of Police, serving from 1946 to 1948. Chief Cowsar hired an Assistant Chief, Johnny Raulston, who was from back east. Sergeant "Cubby" Heaton and several other officers staged a "walk out" and the City Council subsequently fired Chief Cowsar and Raulston. Sergeant Heaton was promoted to acting Police Chief, and he appointed Officer C.W. Kessler to be his assistant.

The City Council did not appoint acting Chief Heaton as the full time Police Chief, but hired S.O. Hamm, a former Texas Ranger. Chief Hamm brought with him H.L. Rich from the Houston Police Department and promoted him to Sergeant. Acting Chief Heaton returned to his previous position of Sergeant.

Front row second from left shows Officer Jack Tomlin, who went on to become Police Chief some 20 years later. In the 2nd row to the right of Chief Hamm is future Records Captain Boots Hawthorne who completed almost 40 years of service with the Odessa Police Department. Top row, next to last from the left to right is future Justice of Peace (1970s and 1980s).

Jess L. Cariker was Chief of Police from 1952 to 1967. In November of 1952 the City Council hired Jess Cariker as Police Chief without Chief Heaton's knowledge. At the time Jess Cariker was hired, he was an investigator for the Dallas District Attorneys Office. His starting salary was $7,200 a year. Chief Cariker was credited for cleaning up the "Tough Cop" image. He was the first Odessa Police Chief to attend the Federal Bureau of Investigation (FBI) Academy.

Wayne Kessler and Cubby Heaton left the force together and started the H&K Armored Car Service, which still services our community today. In 1952, the vehicle fleet of the Odessa Police Department consisted of 3 patrol cars, 2 motorcycles, and 1 traffic unit. The starting salary for a Police Officer was $303 per month. After 36 months, the officer advanced to top pay of $360 per month.

Officer N.E. "Pop" Ratliff was the first employee to retire from the Odessa Police Department with a salary. Jack Tomlin, who progressed to the rank of Lieutenant was sent to the FBI Academy in Washington D.C.

In 1955, convicted rapist Harry L. Butcher was put to death for 2 rapes that occurred in Odessa. This was the first formal death sentence on record for Odessa.

The Police Department moved out from housing with the Fire Department into the old City Hall Building at 221 N Lee; City Hall was then moved to 6th and Graham). The Inn of the Golden West in the background, today is known as the Lincoln Tower Retirement Community. In 1956, 60,000 people attended the Permian Basin Oil Show.

City employees voted to participate in Social Security in 1957; the population of the City was 73,733 at this time an increase of about 43,000 people in 5 years.

Motorcycle Officers in the 1950s

During this period the Odessa Police Department Motorcycle Division switched from traditional hats to motorcycle helmets.

In 1958, the vehicle fleet of the Odessa Police Department consisted of:

All officers received a new badge at a cost of $10 each. The population of the City of Odessa was 79,521 people. In 1959, the Police Department and Municipal Court employed a total of 75 employees. The starting salary for an Odessa Police Officer was $350 per month.

In 1960, the Odessa Police Department received a new teletype machine that put the Department on line with other area agencies. The salary of a Police Officer increased to $360 per month; a $10 per month raise. Chief Cariker announced that music would be played in the lobby of Corporation Court (Municipal Court) to soothe the tension of citizens paying traffic fines. In 1964, the Odessa Police Department purchased it's first polygraph machine at a cost of $1,395.

Jack Fillyaw with pipe and Mike Eudy at the Domino table. Note: this Domino table is still with us and currently is in the Odessa Police Department Break Room.

Chief Cariker was forced to resign after 17 years as Chief. He later went on to teach Law Enforcement at Hardin Simmons University in Abilene. In 1970s and 1980s, he was the Director of Security for Furr's Inc. Former Chief Cariker had a total of 34 years in law enforcement.

Traffic Lieutenant Jim Hallman with Motorcycle Unit in 1976, and the unit is shown on new Kawasaki motorcycles; a switch from Harley Davidsons.

The SWAT teams from the 1970s have gone through a major renovation into the 1990's and the new millennium, due to the advancement of technology, weapons and the concern for officers' safety. SWAT teams have progressed as specialized units of law enforcement. The tactical gear worn today compared to teams of the past enables team members to perform their assigned task while assuring a safe, successful outcome to both the public and law enforcement.

Members are highly trained in areas of specialized weapons, tactics and operations.

Chief Stewart, who served from 1981 to 1991, was the first Chief of Police with a college degree. Chester Nolan, Assistant City Manager, was acting Chief of Police, for approximately 6 months while the City looked for a new Police Chief.

Dispatcher C. Miller in the Radio Room in OPD, prior to 1996.

Dispatching calls for service was conducted in the basement area of the Odessa Police Department. On September 26, 1996, dispatchers for the Police Department and Fire Department were combined into one unit, moving into the newly established dispatching center located at the Municipal Plaza Building. Today's center consist of 4 Dispatching areas (2 police and 2 fire), 2 call taking areas and 1 training area. Today's equipment is the most current state of the art communication system, utilizing computer technology to assign and track all calls for service.

Construction of the new Police Department located at 205 North Grant began in 1982 and was completed in 1983. The current location houses both the Police Department and Municipal Court. Also included is the City Jail which is currently being leased to a private business for housing outside prisoners.

The unit depicted was first placed into service in October 1939 and removed from service in June 1989, just 4 months short of 50 years. At this time there were 19 motorcycles in service.

James Jenkins came to the Odessa Police Department on September 9, 1991 from Daytona Beach, Florida Police Department where he served for 24 years and retired as a Deputy Chief. Chief Jenkins brought with him many innovative police programs including the philosophy of Community Policing, bringing law enforcement and the community together for the common good of the City. Joining forces in a unique solidarity to fight crime and problem solving. He retired from the OPD after 10 years of service.

The Community Relations Division was formed under the direction of Chief Jenkins in December 1991. The Division was charged with all Community Policing projects at that time, such as Neighborhood Watch, McGruff, Police Athletic League, Explorers and the Teddy Bear Program. Within 18 months of its inception the various programs administered by this unit expanded to a total of 26 different programs.

In July of 1994, due to this Division’s rapid growth and public acceptance, the entire Division was transferred to the newly City acquired Municipal Plaza Building located at 4th and N Lee Street.

Christopher C. Pipes was appointed as the Department's 11th Chief of Police by City Manager Richard Morton in January of 2002. He began with the Department as a cadet in March of 1983 and promoted through the ranks. He holds 3 degrees, including:

During Chief Pipes' tenure, new technology was introduced to the Department. Each Patrol Unit was equipped with a moving radar and a mobile data computer. The video home system (VHS) in-car audio/video recording systems were replaced with digital equipment. The "PDSTAT" program, which provides real time computerized crime data to Department personnel on a regular basis in order to target resources against individuals and locations that are the source of criminal activity, was also instituted.

Additionally, the Community Relations Unit was greatly streamlined to eliminate programs for which no proven benefit could be demonstrated in terms of crime reduction. As a result, numerous police officer positions were moved from this unit back to the Patrol Services Bureau. Chief Pipes retired on March 31, 2008, after 25 years and 1 month of service. 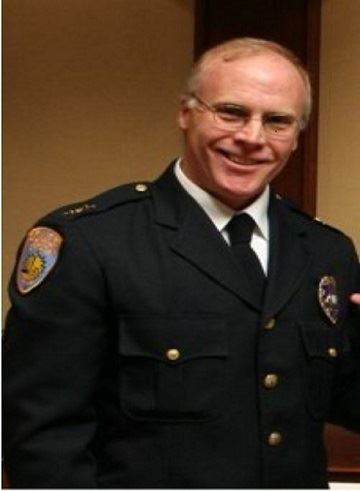 Tim Burton, from Portland, ME, was the Odessa Police Department's former Chief. Burton was offered the role of Chief of Police by the former City Manager, Richard Morton.  Tim Burton was Chief of Police from August 31st, 2008 to March 31st, 2017, when he retired. 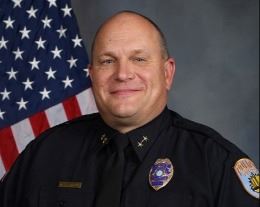 Mike Gerke, a 20-year veteran of the Odessa Police Department, was named as the Department's new Chief. Chief Gerke, a 45-year-old native of east Texas, was offered the position by the City Manager, Richard Morton. He has implemented intelligence led policing which focuses on the Police Department's crime fighting resources in, "Impact Zones." This method of crime fighting utilizes crime analysis to pinpoint hot spots and direct resources to that area. He has been with the Department since June 16th, 2017.