The Odessa Economic Index is losing ground in huge chunks through May, falling by nearly 10 full points for the month to 245.4 down from 255.1 in April, and down 9.5% from the May 2019 OEI of 271.2. The index - and thus the local economy - has been in a state of general decline since midyear 2019, but the pace of decline has clearly worsened starting in March, and was particularly acute in May surpassing April as the record largest one-month move in the index.

General spending remains negative as has been the case all year long, but again the numbers are delayed by two months, so the worst of those numbers is yet to come. Auto sales data is timely (reflecting auto sales activity in May) and continues to indicate sharp year-over-year declines. Airport activity doubled from April to May - and was still down by over 80% compared to year-ago levels.

Payroll employment - the estimated number of jobs in the Odessa metro area - is down by 12% compared to year-ago levels; curiously, though, the seasonally adjusted number of jobs actually increased slightly from April to May after the sharp drop from March to April, suggesting the worst of job loss may be over. The unemployment rate worsened, however, continuing its destruction of any previous record high unemployment rate levels. 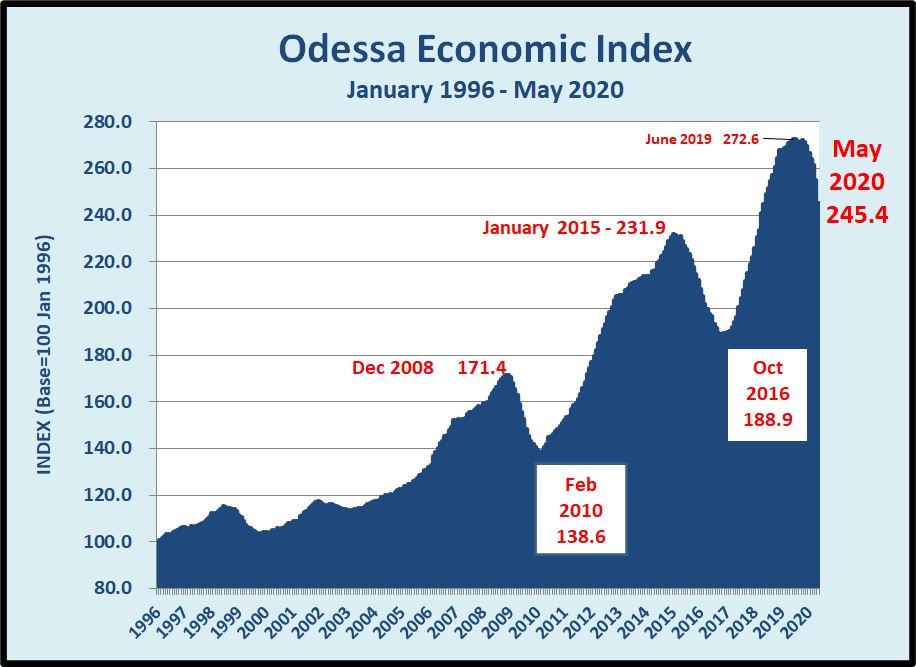 Crude oil prices rebounded in May off the April lows, improving by $10/barrel and averaging $24.67 for the month (WTI posted) compared to $14.68 in April. The WTI posted price began the month at $14.75 and finished the month at over $30/barrel. The number of drilling permits continued to decline, however; the 156 permits issued across the regional (RRC districts 7C, 8, and 8A) was the lowest since the 147 permits issued in December 1999. The monthly average rig count fell by nearly 100 rigs in May to 115 down from 213 in April and over 300 in late 2019.

Metro area oil and gas employment, which had been in decline since early 2019, began to fall at a faster pace in April and worsened in May with the loss of nearly 3,000 jobs from one month to the next, and industry employment is down by over 15% year-over-year. Production data is under constant revision, but the best estimates suggest crude oil production in the region (also the total of RRC districts 7C, 8, and 8A) peaked in March at over 3.9 million barrels per day, and has declined by about 435,000 bpd in the ensuing two months.

The Texas Permian Basin Petroleum Index declined again in May as expected, but the rate of decline slowed compared to the previous two months. After declining by 13 points and 15.8 points in March and April, respectively, the index fell by 5.5 points in March to 265.2, a decline of 22% compared to the May 2019 TPBPI of 340.0. The regional oil and gas index has now fallen for 15 months straight through May after achieving its recent cyclical peak (though not its all-time peak) in February 2019.

The interconnected double whammy of the COVID shutdown and the deep, rapid contraction in regional oil and gas activity continues to exert extraordinary downward pressure on the Odessa general economy. There are some signs, however, that the worst of the causal impacts are behind us at this point. The local economy, along with economies everywhere, endured the worst of the lockdown in April and May, and some of the numbers appear to have been at their worst in April, beginning to register some slight improvement in May. 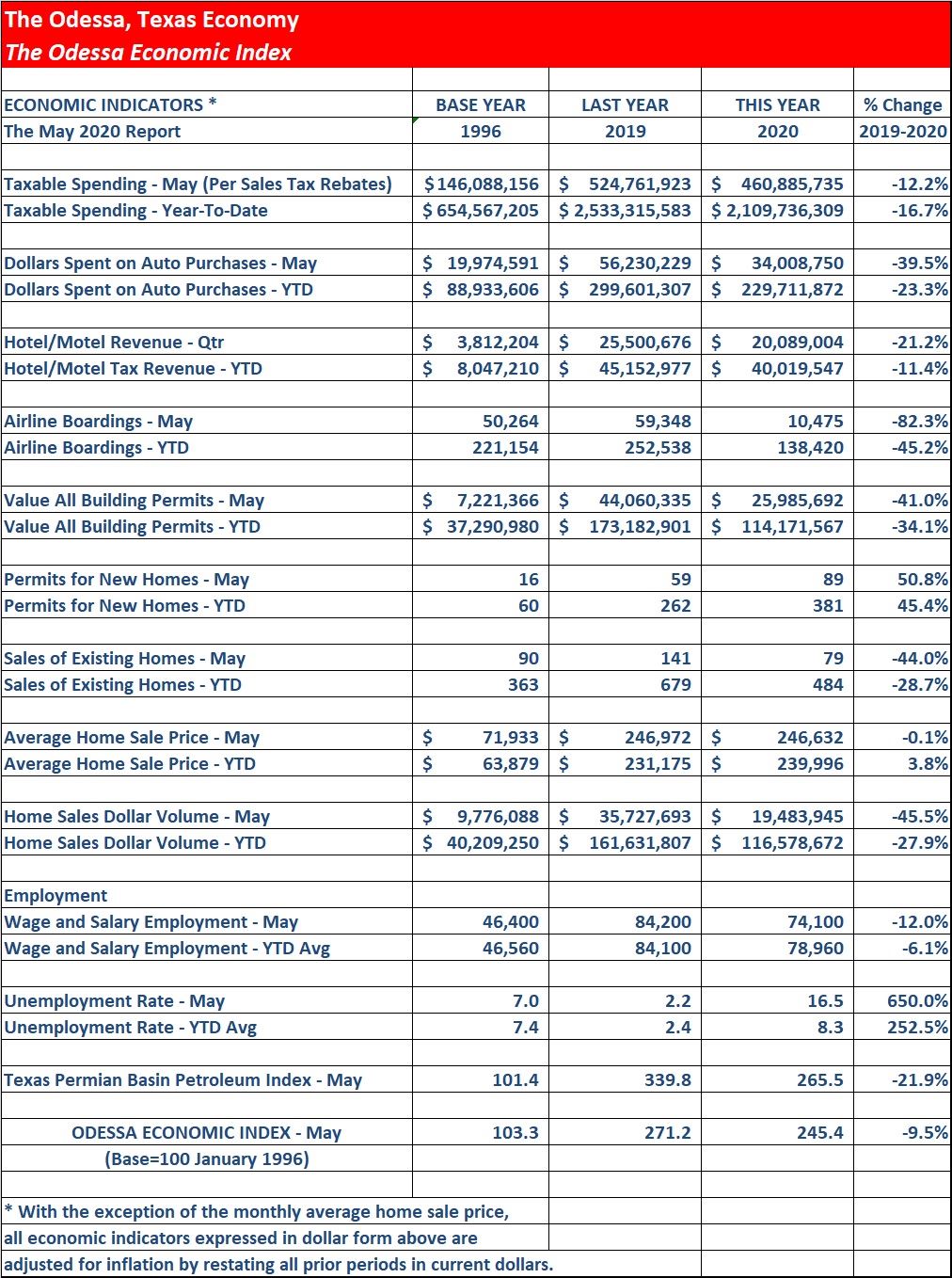 Most notably, this appears to be the case for Odessa employment which dropped an estimated 9,600 jobs from March to April, a decline of nearly 12% of all metro area jobs in just one month. The broad expectation was for continued job loss in May, but that did not turn out to be the case, at least according to the current estimates. Seasonally adjusted employment data for the Odessa metro area (which can be compared from one month to the next unlike the non-seasonally adjusted numbers) indicate the addition of 800 jobs from April to May - a small number, but encouraging in that employment did not continue to decline in May. The non-seasonally adjusted estimates, which are indicated on the data table as they are most appropriate for year-over-year comparisons, is down by a sharp 12.0% in May compared to May 2019, but even that is slightly better than the 13.4% rate of year-over-year decline in April.

The Odessa metro area unemployment rate continues to look particularly nasty, however, spiking upward to 16.5% in May compared to a very low 2.2% in May 2019. May will be the peak month for the unemployment rate, and it will begin to subside and come steadily downward as more Odessans are put back to work.

Construction activity logged another sharp year-over-year decline in May with the real (inflation-adjusted) valuation of all building permits issued down by 41% for the month compared to May of a year ago. The total for the year-to-date is now down by about 34% through May compared to the first five months of 2019. 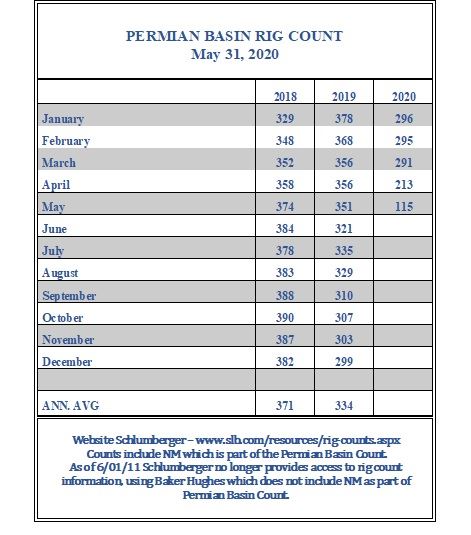 On the other hand, the number of new single-family residence construction permits issued is at record levels thus far in 2020. The 89 permits issued for the month is a May monthly record and is up by 50% compared to May of a year ago. For the year-to-date, the 381 permits, also a record for the first five months of the year, is up by a sharp 45% compared to the total through May 2019.

Existing home sales began to weaken in the second half of 2019, but the pace of year-over-year decline clearly worsened beginning in April and continued in May with a 44% decline in closed sales for the month compared to May 2019. For the year-to-date, existing home sales are off by 29% year-over-year. The average price of those sales is holding its own, however, down only slightly compared to the May 2019 monthly average which in turn was up by over 7% compared to May of the prior year. Through the first five months of the year, the average home sale price in the Odessa market remains a comfortable 3.8% improved over the average through May 2019. 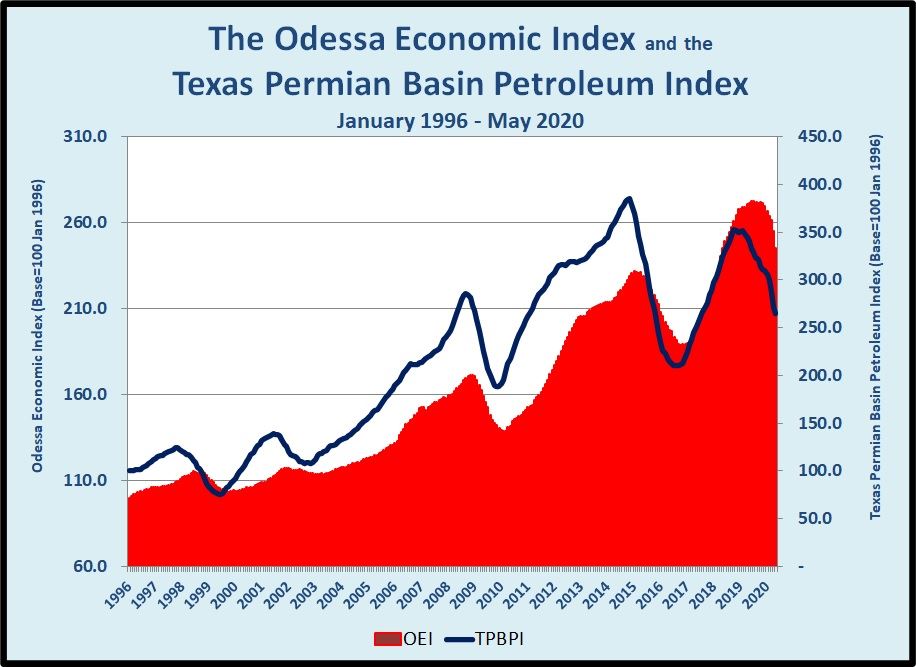 The total inflation-adjusted dollar volume of housing sales activity in Odessa has obviously dropped, however, because of the sharp decline in the number of transactions, down by 45% in May and 28% through the first five months of the year.

The Odessa Economic Index has fallen to 2018 levels at this point with more to come as the full impact of COVID-19 is added to an economy that was already in a state of decline. Energy markets are doing their work, however, pushing production downward to adjust for the sharp decline in demand thanks to COVID, and responding to at least some improvement in demand as economies reopen. That process has stalled (though has not worsened, really) with a new round of coronavirus concerns. The nature of the reopening and recovery will obviously control the pace of general economic recovery, both in terms of openness of the Odessa and Permian region economies, and the continued crude oil price increase based on demand recovery.

The numbers through May reflect an unprecedented economic decline in such a short period of time. But again, there are signs that some measures of economic activity have seen their worst, pointing to an economy poised to recover as fast as COVID-19 will permit.